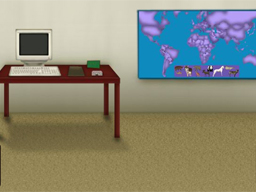 
The scene with window

To get the answer you need to know the Pythagorean theorem, which states that the square of the longest side of the ninety-degree triangle equals the sum of the squares of the other two sides. In this case the longest side is the one we need to find, titled x.


The scene with window

To be able to solve this test, you need to get some parts from the box located on the right side of the bench with plants. To open the box, count the number of squares, circles and triangles. The box contains a water bottle and shears.

Move the sunflower to the window, as it requires a lot of sun. Azaleas need some pruning as the leaves have grown too wild. Use shears on it. Yellow hibiscus requires frequent watering. After doing all of this, the plants will open and reveal numbers.


The scene with computer

This test is actually one of the lengthy and more complicated ones. However, a few minutes of web research should provide you with the knowledge you need. You need to place the animals in their natural habitat. Of course, a lot of these animals can be found in several countries. However, they are associated with one particular country more than with others. For example, a bear can be found in many northern countries, but in social media they are often associated with Russia.

Moose=Canada. Moose can be found in several countries but is largely present in Canada and is often referred to as a symbol animal of the country.

Coyote=USA or Mexico. This animal lives in the Northern and Central America. It is often present in the Native American folklore, therefore the correct answer would be USA or Mexico.

Harp Seal=Greenland. Harp seal lives in the Arctic waters and therefore can be associated with a list of northern countries. However, its scientific name, Pagophilus groenlandicus, translates into "Ice-lover from Greenland", therefore the correct answer would be Greenland.

Elephant=India. Elephants can be found in Africa and Asia. However, one particular Asian country - India - often comes to mind when people think about elephants. One of the Hindu deities, Ganesha, has a head of an elephant. In addition, during the wedding ceremony grooms often arrive on elephants, which are considered sacred.

Panda=China. This one is very straightforward as it's known to be found in China.

Camargue Horse=France. Camargue is a region in France, where the horse can be found, hence the name.

Cape Mountain Zebra=South Africa. This isn't any kind of zebra. This is the kind that dwells in the Eastern and Western Cape provinces of South Africa.

Camel=Egypt. Camels' natural habitat is a desert, which happens to cover a big part of Egypt. When people think about Egypt and its pyramids, they also think about camels as the typical sightseeing of the country.

Kangaroo=Australia. I doubt there were any who did not pick Australia for this animal.

Bear=Russia. As already mentioned above, bear is often mentioned as the typical animal of Russia. In fact, it is part of one of the popular stereotypes about Russia, according to which bears can be seen on the streets of Russia.

After all the animals are placed correctly, the geography code is given.


The scene with a bookshelf

To be able to solve this test you need to get the books located in the cupboard on the bottom right of the bookshelf. Click on the squares to rotate them in order to get a picture. Once the picture is completed, click on the button on the left.

Three Comrades=R. Author: a German writer Erich Maria Remarque, who wrote several books narrating the horrors of war. His works were forbidden and burnt by the Nazis, forcing the author to leave Germany

Pride and Prejudice=A. Author: Jane Austen. Even though the novel was written in the beginning of the 19th century, its themes are still relevant today prompting numerous remakes and adaptations.

The Shining=K. Author: Stephen King. Perhaps, some of you got acquainted with the novel when the film came out in 1980 starring Jack Nicholson. The novel published in 1977 brought immediate fame to the author solidifying him as a writer of horror.

Around the World in Eighty Days=V. Author: Jules Gabriel Verne. The author who travelled a lot himself wrote numerous works of adventures introducing imaginary yet scientifically explained innovations.

War and Piece=T. Author: Leo Tolstoy. It is one of the author's most famous literature pieces. It richly depicts the lives of different members of Russian society during the war with Napoleon in the 19th century. Through the novel we can perceive Tolstoy's views favoring nonviolence and pacifism.

The Great Gatsby=F. Author: F. Scott Fitzgerald. Published in 1925 the novel initially did not have great success, but rose to fame sometime after the author's death, leaving him oblivious to his own literary success.

Don Quixote=C. Author: Miguel de Cervantes. It is a Spanish novel consisting of two volumes published in 1605 and 1615. Written as a satire, it's richly interwoven with various themes encouraging numerous interpretations.

The Catcher in the Rye=S. Author: J.D. Salinger. The book published in 1951 gained immediate success especially amongst the young readers as it depicts adolescents' alienation during their transition from childhood to young adulthood.


On the right from the exit door

The last container on the bench titled C2H6O is actually empty. You need to get the missing liquid from the safe on the right side of the bench. To open it you need to combine the colors on the top to color the white circle the same color as the circle next to them. To do so, click on a little circle at the top, selecting it, then click on a square adjacent to the circle you're trying to color. There are always two squares next to the circles meaning that you have to use two colors to achieve the color you need

Click on the small pink circle at the top (third circle from the left), then click on the left square coloring it pink. Then click on the blue circle (second from the right) and click on the top square. The last color you need to choose is yellow (the circle on the right). Color the square on the right with it. The safe will open giving you a bottle of alcohol. Pour it into the empty container on the bench.

Here is a simple example of how to translate binary numbers. Basically, the numbered position from right to left of each zero or one is the exponent to be used with the number two. Add up the twos to the power of the exponent if the digit is 1 and leave out the twos with the digit 0.

On the right side of the table with the computer

Get the pen in the glass box. The code is indicated on the picture behind it. Use the pen on the notebook

The formula to solve it is the following